Would you like to switch to the accessible version of this site?

Don't need the accessible version of this site?

MyoVision is a wireless physiological monitoring system that allows chiropractors to measure the effectiveness of treatment over time with quantitative, objective data. In the event of a car accident and resulting whiplash injuries, this technology may be your best defense.

What is MyoVision, and where did the technology come from?

NASA from 1983 to 1986, were evaluating hand controllers that were going to be integrated into the helicopter cockpit. They were comparing different hand controllers, and one of the things they were looking at was whether one of these hand controllers was creating more muscle fatigue than the other. They put together their own million-dollar lab at NASA and they completed a master’s thesis on evaluating hand controllers using this technology called Surface Electromyography. Very simply, the device measures muscle tension, in the same manner as an EKG. A grant was written and a proposal to the National Institutes of Health to develop the MyoVision device. There really was no place for it with chiropractors at the time, but we found out that when people have neuromuscular injuries, or spinal subluxations, the device is able to detect the muscle firing which occurs to compensate for the injury. For example, in a whiplash the device can establish whether injuries are real or not, and how severe they are by evaluating the muscle firing patterns and amount of “spasm” or hypertonicity.

What does the MyoVision device look like, and what does it measure?

There are two devices. The static EMG is a handheld device that is more of a screening tool. It gives you a quick reading of the muscles around the spine. It provides a graphic image of the back, showing levels of muscle tension as bars extending from the center of the spine outward. You can see how much muscle tension there is and the pattern of muscular bracing and guarding. The new patented 3G Wirefree device performs the test in only takes thirty seconds due to its unique design which allows it to take two measurements at a time instead of one. 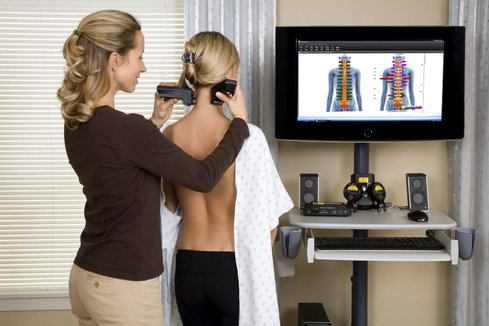 The second tool, which is called the dynamic EMG or DynaROM, simultaneously measures range of motion along with surface EMG and graphs them over time. It allows you to document not just how far the patient is able to bend, but if muscles guard and brace in response to limited range of motion, it allows you to document the presence or absence of injury. It is more of a functional test as the patient performs all the ranges of motion during the test. DynROM sEMG is a wonderful add-on to Static sEMG because some individuals are used to the pain they are in while standing still (the position the Static sEMG is measured in), but when we move the patient, we then elicit abnormal muscle firing patterns which don’t always appear in the static test. It is a definite requirement when documenting any type of personal injury or workers compensation case. 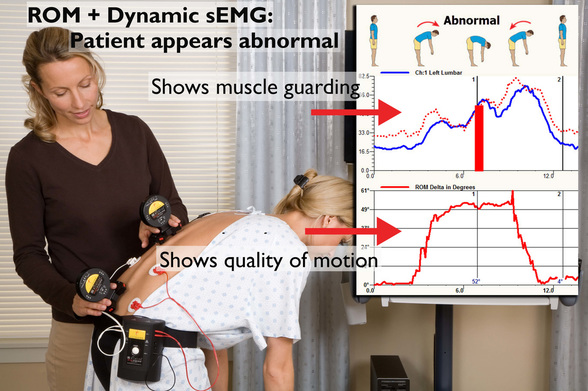 The current MyoVision is called the 3G Wirefree System ™ , and it’s revolutionary not only because it measures how far you can bend and muscle guarding simultaneously, but does so in a wireless fashion with a range of up to 50 feet. This range allows you to walk out to potential patients at a screening and not have to convince them to come to you to be tested, increasing your ability to “connect” with potential patients without them experiencing the fear of commitment that comes with having them come up to your booth.

What is it like to have the MyoVision technology used on the body?

There are no sensations at all when MyoVision is used as it simply measures and does not stimulate at all. It is so safe it can be used on pregnant women and children and is completely painless.

How can Dynamic or Kinetic sEMG be used if a person is in a car accident?

Why does it work? It is the body’s natural defense mechanism to respond to subluxations and/or soft tissue injury by bracing and guarding to immobilize the region of injury. Research studies have shown clearly that when someone has an injury from a whiplash, for example, that their muscles not only fire to brace and guard, but fire with significant irritability. When you have that sudden acceleration and deceleration that occurs in a whiplash, you damage the ligaments. The muscles have to then take over and do the job the ligaments are supposed to do and keep the spine in place. What happens in whiplash, then, is that the muscles have to tense in an extreme fashion to compensate for the instability created by the ligamentous damage caused by whiplash.

The unintentional response to injury is to tense those muscles. What is different is that we’re measuring this and documenting it accurately, objectively and very quickly. That’s what makes MyoVision unique. We’re able to show a jury data in a visual form using graphics establishing that, yes, indeed, when a person goes to move their head, their muscles fire in an abnormal fashion.

How long after a car accident should the MyoVision technology be used?

If an injury is not treated properly, we can still see it two to five years later, but, in general, it’s optimal to use it in the first four to six weeks. This tool can then be used to see how well the treatment plan is going, so you might do another test six or eight weeks after that to track progress and either continue or alter the treatment plan if needed.

Do most chiropractors have MyoVision?

It’s something that most upper cervical practitioners have not quite adopted unless they do personal injury work. It is now recognized as a standard tool for evaluating injury by the American Medical Association, the American Chiropractic Association’s Fitness and Rehabilitation group and the International Chiropractic Association so more people are beginning to accept it. Chiropractors who use MyoVision are always amazed at how patients respond, and are able to show what is going on inside the body. MyoVision does this job for them so they can focus on adjusting and not convincing patients to stay with them for care.

What Can We Help You With?